Brighton and Hove City Council identified that on average 80% of the traffic on King George VI Avenue into Hove was travelling up to 15mph over the 30mph speed limit. This was occurring because of the quick transition from the 60mph zone to the 30mph zone along the road. Because the speed limit was not being adhered to, an unacceptable number of accidents were happening. Demands were made for speed reduction along this stretch of road in order to decrease the number of accidents taking place. 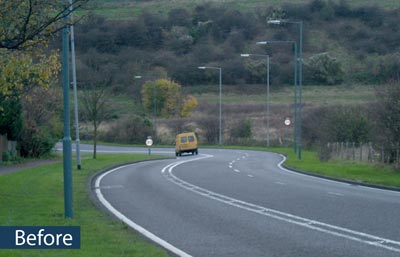 To help reduce the speed of traffic travelling along the road and the number of accidents which were occurring, it was decided to introduce an experimental extension to the 30mph limit on King George VI Avenue. The cars travelling along the road needed to be made aware of the speed limit change. To achieve this, a highly visible gateway to the 30mph zone was required. As an existing Glasdon customer, Brighton and Hove City Council were aware of the extensive range of Glasdon products and had previously purchased Advanced Chevroflex™ from the company. Chevroflex had been used very successfully on a number of the roundabouts in the city and had proven to be a very resilient and effective traffic calming application. It was decided that Chevroflex could be used to create a highly visible gateway to indicate the change in speed limit down to 30mph. 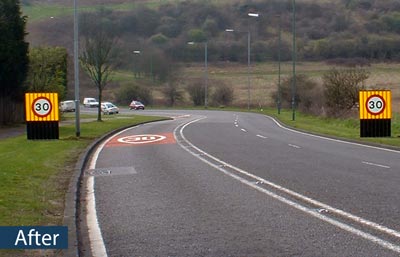 Advanced Chevroflex has provided a highly visible gateway to the 30mph zone along King George VI Avenue into Hove and has helped to reduce the speed of vehicles travelling along the route. As a result of speed reduction, the number of injury-causing accidents has also declined.

What the Customer Says...

''Excess speed on King George VI Avenue contributed significantly to the unacceptable number of injury accidents. Demands by Council members for speed reduction led to an experimental extension to the 30mph limit utilising Chevroflex as a highly visible gateway. As a result, average traffic speed has reduced by 5 to 7mph.''