Another Successful Cycling Season for the Lewis Balyckyi Crit Series

For yet another successful cycling season, Glasdon were the proud sponsors of the Lewis Balyckyi Crit Series helping to raise money for a special charitable trust.

The 2018 series involved 18 weeks of racing held at the UCLan Sports Arena in Preston with N-Fuse Sports presenting the races, and additional support provided by sponsors Paul Hewitt Cycles of Leyland and Springfield Financial of Preston, all in support of the trust created in memory of Lewis Balyckyi. 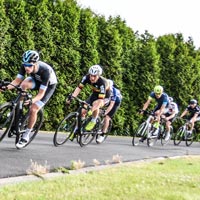 Organised by the Lewis Balyckyi Trust as a single race on Blackpool Promenade in 2012, the event moved to the Arena in 2016 to accommodate its new league format providing Junior and Senior riders around the North West the chance to compete in one of the best closed circuits in the country.

All profits from the series go straight to the Lewis Balyckyi Trust Fund.

Established by parents Kevin and Jacqui Balyckyi, the trust fund was founded as a lasting tribute to Lewis, who was tragically killed in a road traffic accident in January 2011.

A promising young cyclist tipped to make it to the top of professional cycling, Lewis was a member of the British Cycling Talent Team and was preparing to join a semi-professional cycling team in France when involved in the fatal collision.

The Lewis Balyckyi Trust was created to help other up-and-coming riders who share Lewis’s dream to reach their potential and enable them the opportunity to train and race in Europe.

In the third year as the headline sponsor of the Crit Series, Glasdon were proud to hand over a cheque of £6,000 to the well-deserving trust.

“The race is a great opportunity for riders to come together every week through spring and summer to compete in the impressive 1-mile circuit, and we are thrilled that the event keeps gaining popularity each year.

We introduced a new prize structure in the 2018 series, with on-the-spot prizes being awarded after each race to give riders something to aim for, and we think this had a hand in us achieving an even better turn out!”

“We could not run the series without the invaluable support of these amazing local businesses. The set-up costs of the series can be daunting but the financial support we receive means that more of the money we make can go towards supporting young riders as they bid to make their cycling dreams a reality.”

“The Crit Series has raised a huge amount over the years and we are thrilled to be involved in helping support young cyclists achieve their ambitions in furthering their cycling careers. We are therefore pleased to announce that we have agreed to continue as the headline sponsor for the 2019 series."

In the last 7 years, local cyclists entering the Lewis Balyckyi Glasdon Crits Series have raised £30,000 for the Lewis Balyckyi Trust, with the Crit Series anticipated to continue growing and able to support many more riders in the future.

With the success of the 2018 series, organisers say it is a testament to the loyal local racing cyclists that turned up, week in week out, with over 700 entries across the season.

The 2019 Lewis Balyckyi Glasdon Crits Series will start on Thursday 28th March and will run every Thursday for 18 weeks.