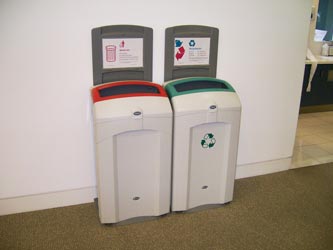 Established in London in 1882, Herbert Smith LLP has more than 1200 lawyers across a network of offices in Asia, Europe and the Middle East. The firm’s main clients are leading global and national businesses; many headquartered outside the UK. Herbert Smith LLP is acknowledged as one of the world’s leading legal practices offering clients a full range of services across its top-tier dispute resolution and corporate capabilities.

As part of the company’s commitment to the environment, it was decided to implement an initiative that would help expand current recycling. A compact system was needed to provide for a number of waste streams without taking up valuable space.

A recycling unit was required that would hold a large capacity of waste, whilst being simple to use and easy to differentiate from other waste bins. It was also important that the units would encourage staff to engage in the new recycling philosophy. 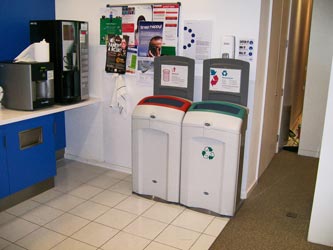 After previously purchasing a number of Nexus® 140’s for paper recycling, Herbert Smith LLP considered the Nexus 100 for their new recycling scheme. A Glasdon Representative visited to demonstrate the product, and it was decided that the Nexus 100 met all their requirements.

Nexus 100 Recycling Bin is a stylish and modern recycling unit with a large 100 litre capacity. Chosen to collect co-mingled recyclable waste throughout the firm, the Nexus 100 unit is easy to use, it has a front pivot opening removable door, with easy to clean drip tray in the base. The optional sign kit allows clear signage to be displayed to help promote the recycling scheme, and encourage correct use.

The staff at Herbert Smith LLP have enthusiastically embraced the new recycling procedures which offer a clear traffic light sign kit system: red for general waste and green for recycling and they have successfully reduced the amount of contaminated waste.

What the customer says

"The implementation of the Nexus 100 has helped us increase our dry recycling year-on-year by over 200%. Alongside the efficient and friendly service that we received from Glasdon, our cleaning team find the units easy and safe to empty." Darren Norris, Facilities Co-ordinator, Herbert Smith LLP London

What are the benefits of office recycling?
Friday, October 13, 2017
View All