Works on the scheme, which takes in Oxford Road and Wilmslow Road, commenced in Summer 2015 following Transport for Greater Manchester’s successful bid to the Department for Transport for £20 million.

As an appointed highway safety supplier for the scheme, Glasdon UK worked with the design teams to provide a new safety solution for the innovative bus stop and cycle lanes.

“We were absolutely delighted to be appointed as a supplier for such a ground breaking scheme.

““Glasdon have been a leading manufacturer and supplier of highway safety products for over 50 years now and this was a superb opportunity for us to demonstrate our expertise in the field and provide advice which led to new product design and adaptations through collaboration.”

The new cycle lanes have been built into the existing carriageway with raised curbed islands to segregate the cyclists from the motor vehicles on the route.

One of the main safety features of the new road layout, which is commonly found in Holland, is the placement of the bus stops which allow cyclists to safely ride behind the bus stop instead of overtaking buses at the stops. 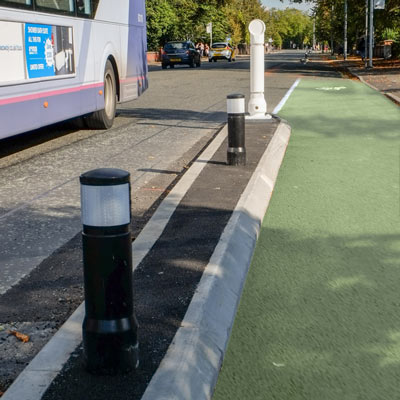 The Illuminated Mini-Ensigns are fixed at the start of each new section of cycle lane on both sides of the route.

For additional safety Glasdon also supplied a new version of the Edgeliner Bollard in black and manufactured from passively safe Impactapol® polymer material.

The Edgeliners are also fixed into the raised curbed islands to prevent the motor vehicles crossing into the cycle lane.

Passively safe Impactapol® polymer is a flexible material with excellent recovery performance. Glasdon Impactapol rebound bollards can be securely fixed below ground through the use of the extended base unit or bolted down.

Check out one of our product testing videos here, which demonstrate the strength and performance of Glasdon rebound bollards.

The Glasdon Guide to Specifying Cycle Parking
Thursday, August 6, 2020
Watts the Difference?
Tuesday, May 10, 2016
View All